Hanabi Minamigawa (南川 花火 Minamigawa Hanabi) is a Loveless character who has so far appeared in two chapters. She has appeared only in extra chapters and has interacted with Ritsuka Aoyagi and Soubi Agatsuma (the main characters). Hanabi is part of a dojinshi circe and markets her amateur comics at events like Comiket. The Ko Zero-Sum chapter goes into the description of this process in length. Her passion is Boys-love manga. Hanabi has not been revealed to have any affiliation with the world of Fighters and Sacrifices and appears to be a completely civilian character. She is connected to the main characters through her enrollment to the same college as Soubi. He has helped her with her BL manga on several occasions.

Kouga Yun introduces readers the the world of Comiket and doujinshi through this chapter. It is where she got her own start, afterall.  In this chapter Hanabi is introduced as Soubi's classmate, with 6 years dojin experience at age 20 (meaning she started at age 14.) Hanabi says that she is only inviting Soubi along to the Comiket because she needs a car and a ride (implying that canonically Soubi has a car.) Soubi brings an interested Ritsuka with him to see the Comiket firsthand and help out with Hanabi's sales. In this chapter Hanabi is shown to be a very hard worker regarding the process of selling dojinshi. Hanabi promises to treat Ritsuka to dinner after the Comiket ends. Afterward, Ritsuka compares her to a site foreman and claims her work is amazing as he flips through a copy of her BL --he also has a thought bubble thinking "It's so erotic." Soubi corrects Ritsuka and says the correct term is Sensei.

At the end of the chapter a group of girls who had been helping with the doujinshi sales say that they think Soubi is hot and ask if Hanabi is dating him. She denies with a laugh and states that she likes otaku. She also says she's dating a publisher in the sexy girls genre.

The 88th chapter of Loveless, an extra, revives an old character. It focuses on Hanabi as Soubi lends her a hand. Hanabi's appearance has changed dramatically this chapter. She's now sporting large glasses and above shoulder-length hair and bangs (without screen tone as it had previously.) In addition to the obvious changes, Kouga Yun's style has made a noticable change since she last drew Hanabi. 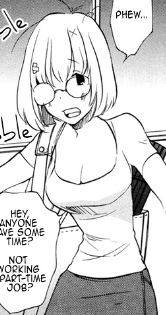 The doujin author bursts into a classroom begging for anyone to help her out and sets her eyes on Agatsuma Soubi. She needs someone to help her draw background for her manga. She appears very worn out and reveals that she hasn't slept the past night working on her manga. Soubi spouts some shady business about leaving if he's called away which Hanabi misinterprets as women calling him out on dates. Hanabi calls him a bishonen, an attractive young man. She says that Summer Comiket is coming up and everyone else is too busy to help her out. She praises Soubi on knowing how to use a nib pen because the others in her class look down on people who draw manga. Hanabi shows some modesty and doubt regarding a potential career in the field of manga. When Soubi praises her work as being erotic she is overjoyed with the compliment. At this point she beings to boast in good humor and warns Soubi not to fall in love with her. In the end she says she has already stayed up three nights in a row and Soubi encourages her to do more. In the last panel of the chapter, it is discovered that Hanabi cannot cook, and Soubi makes a pun regarding what she attempted to make.

Community content is available under CC-BY-SA unless otherwise noted.
Advertisement